For this Holo Friday I want to show you a golden oldie! Meet Disco Darling from Nox Twilight! :D
I've shown you this before but it was a long time ago ;) I thought it was time to take some better pictures and review it again ;)
The pictures don't do it justice at all! There is a reason why it's called Disco Darling and think you can figure out why ;)
Disco Darling is inspired by the Twilight movie. Apparently a vampire's skin sparkles like diamonds in the sun. :) 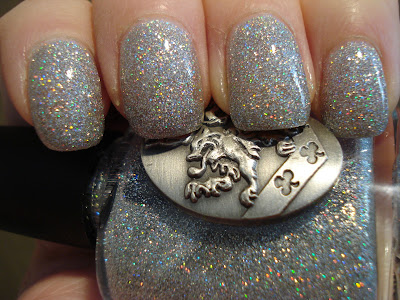 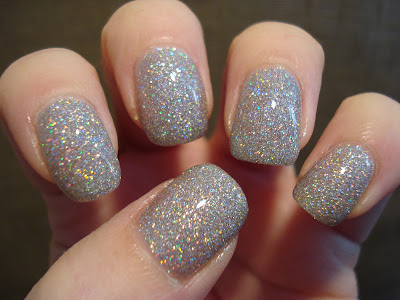 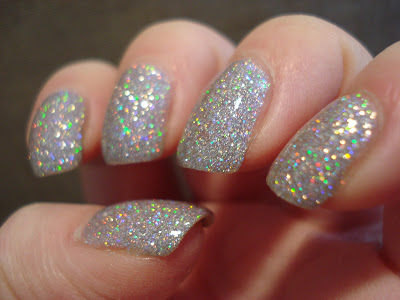 GOOD TO KNOW ABOUT DISCO DARLING:

Colour: Lots of silver holo glitter in a clear base.

Opacity: Ok for a glitter polish. This is three coats.

Drying time: A bit slower than normal due to the thicker formula.

Formula: Good! Comfortable to work with. Perhaps a bit thick, but then again it's at least two years old by now.

Brush: Very good, a bit thicker than normal but that's how I like it!

Shine: Very shiny on its own, but it leaves your nails with a bit of a rough surface so therefore I have one coat of Seche Vite in these pictures.

Accurate colour, photo vs IRL: Colourwise it's accurate, but it's sooo much more glittery and sparkly IRL! It glitters like diamonds on your nails!!! :D And the holo effect really shows off in sunlight! You have to see this polish IRL to fully appreciate it!

This is a really gorgeous silver glitter holo polish with nice qualities! The pictures don't do it justice!
If you find it - buy it! You won't be dissapointed!! And the bottle is so beautiful with its crest!