Broken bottles - think before ordering from this seller!

Today I want to tell you what happened just before Christmas last year when I ordered nail polishes from the U.K based seller fragrancemad.com

After seeing some beautiful milkywhite glitter polishes from W7 at Gelic's I ordered nine bottles from fragrancemad.com. After a week or so I got them and collected the parcel at my local post office.

Immediately I understood something was wrong because when I got the parcel in my hands it sounded like there was a rattle snake in it :/ I rushed home and opened it and you can imagine my disappointment when I saw this mess... 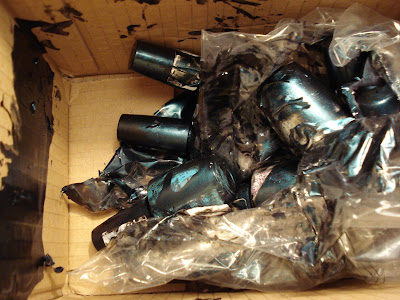 One bottle had broken and covered all the others in dried nail polish and glass pieces!!! And it must have happened early because the polish was completely dry.

When packing them they had just lain them in a pile in the bottom of the box and then just added some normal flat plastic on them!?!? There was a gap of merely air almost 10 cm to the top of the box!!! Idiots!!! 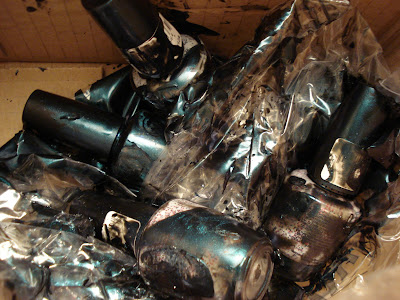 I got so angry!! Five of these bottles were supposed to be Christmas presents and it was already the 20th of December?!?! Arrrgghhhh! >:(
You can't give away bottles covered in dried polish and glass pieces!!! :( 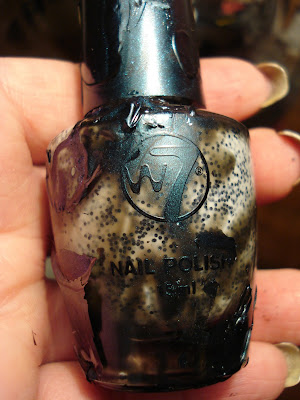 So I wrote to fragrancemad.com and after censoring the mail twice (removing all the bad words and name callings ;)), I ended up sending them this:
"I've just received my order from you containing nine W7 nail polish bottles.
I've never seen such poor packing (and I order a lot online) and as a result one of the bottles had broken in thousand pieces and damaged all other bottles!
These nine polishes were supposed to be x-mas presents but I can't possibly give away any of them now! They are covered in nail polish and pieces of sharp glass has stuck on them as the broken bottle polish has dried!I am so disappointed!!
I want nine new bottles according to the order (much better packed!!) and if you want me to return the mess I'd like a returns label.
I have pictures of the damaged goods if you need to see it.
Please advise a.s.a.p."

The day after I received this reply:
"I'm really sorry about this, the woman who packs our orders has obviously done a bad job. I have made a replacement order this morning and it will be posted today. If any of the polishes you received are usable please keep them, or throw them away if not. I'm so sorry for the inconvenience in not being able to give the polishes as Christmas presents, and I hope that the replacements are with you soon. I will post by tracked delivery so they should be faster than the original order. Have a happy Christmas, and once again I'm really sorry for this mistake."

Five days later I received a note that I had a pacel to collect. This time a sign-for-parcel (rek as we say in Swedish ;)). This time the parcel was even bigger, actually ridiculously big for nine polish bottles ;)
I got it and almost fainted of fury!! The sound from the parcel was like it was a rattle snake in it!!! Aaaarrrgghhh!!!
I ran home and held my breath as I opened it.... The packaging was appallingly bad again but they were not broken... puh... ;)

So I do not recommend this seller but I think they handled it ok during the circumstances (I mean he did say sorry three times ;))
So now I've got eight extra bottles of W7 that after cleaning will be as good as new - I hope ;)


Have you had any bad luck like this with broken bottles?
kl. 14:38