Recently two Swedish nail polish brands released a similar textured shade - a glittery maroon. Isadora released their Wine Crush and Kicks their Black Diamond. I wanted to see how similar they were so I did a comparison.

In the bottles they are very similar. A maroon base with loads of gold glitters.

On the nails you can actually see a tiny difference. Isadora's Wine Crush has a tiny bit darker base but they both have the same amount of red and gold glitters. The bases are actually dark purples but the glitters make them look maroon.

In my pictures I wear two coats of each and drying time is about the same for both of them, about 15 minutes for touch dryness.

The price is 79 SEK for each, but Isadora holds only 6 ml whereas Kicks holds 10 ml.

The wide brush is better on Isadora Wine Crush but Kicks Black Diamond holds more polish for the same money and has a smaller cap underneath the big one which is more comfortable to grip than the Isadora cap.

In my opinion they are so similar that you don't need both. However, they are not dupes either. Based on my comparison my choice is Kicks Black Diamond :) 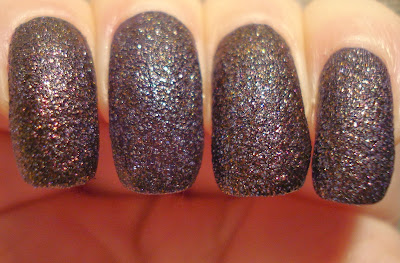 Middle finger and pinkie - Kicks Black Diamond
Pointer and ring finger - Isadora Wine Crush
Which one of these two would you prefer?
kl. 09:00