Now we're in ancient Egypt on our way through of the history of nail polish from 5000 years ago until today.
Hope you enjoy it! (If you missed part one you can find it here!)

Nefertiti and Cleopatra are remembered, among other things, as two of the most beautiful women of their time. They were actually the first to make the iconic red nail polish famous! 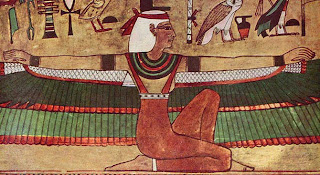 During their respective reigns, societal hierarchy was indicated by the specific colour worn. The stronger the shade of red, the more power the person possessed.

Although the practice likely existed earlier, it’s said that Nefertiti, Queen of Egypt (14th century BC) coloured her fingernails (and apparently also her toenails) a ruby-red colour. Nefertiti and her royal court used henna (and sometimes even blood) to colour their nails. Could this the origin of the phrase "blood-red nail polish...? ;)


Cleopatra, the last pharaoh of Ancient Egypt, continued this trend into the first century BC. Unlike Nefertiti, it’s believed that she favoured a striking crimson shade. During her reign women of lower rank were permitted only pale colours as red was reserved for royalty alone.


Cleopatra’s nail colour came from the juice of the henna plant, producing deep rusty shades with an undertone of gold. Henna on the nails was limited by a strict social code. Only a brave woman dared to colour her nails above her “station”. Moving on up the social scale, nail shades grew deeper and deeper. The most brilliant colours, as red, appeared only on the royal fingertips of the queen.

Imagine beeing able to se a persons "social status" today just by looking at the colour of her nail polish! ;)


As always feel free to comment on this post below! Is it interesting? Are you looking forward to part three?

The next post in this series will be about the nail colouring during 1200 - ca 1930.
We start with the Incas and end with Lustr-ite, a nail enamel cake! :D